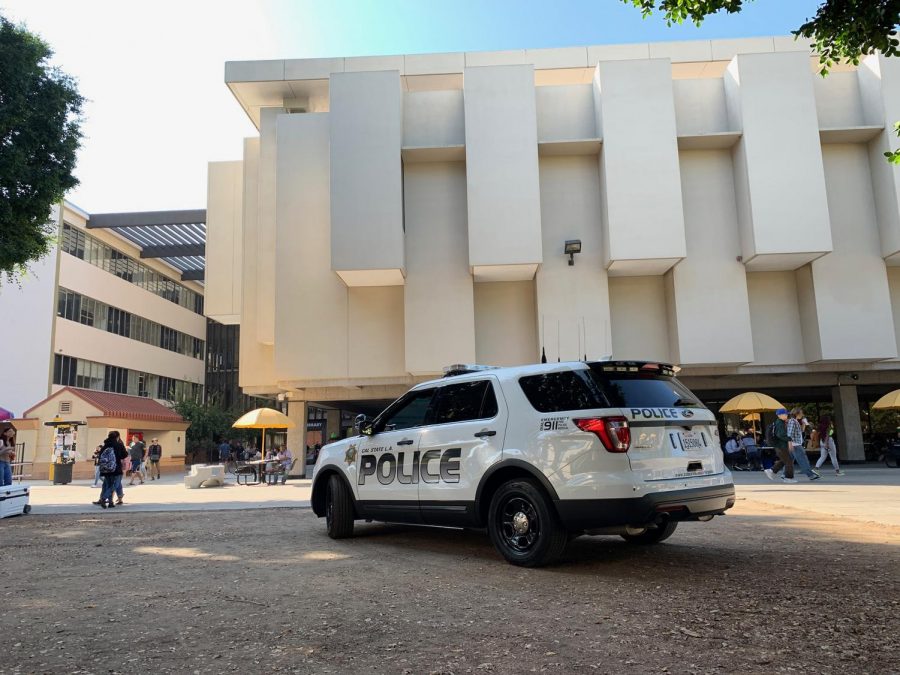 A Cal State LA campus police vehicle stations itself in the front of the library on Monday, November 4, 2019 at around 1:30PM. The library is the second mass shooting target to receive a threat in the span of one week

Rumors spread of another shooter threat, but this time surrounding the campus library.

On Monday, another non-credible shooter threat targeted Cal State LA. It’s the second threat to occur in a span of a week. However, unlike the previous threat, this one was passed on by third and fourth parties on social media, according to a police dispatcher interviewed by the UT at 1:30 p.m.

The threat was not called in by a potential shooter, and the source of the rumor is unknown.

Police officers were seen at the target of the rumored threat as a precaution. The UT reached out to the university’s Office of Communications and Public Relations who referred to the school’s official Twitter page for updates on the threat.

Early afternoon, a post on the Facebook “Book Exchange” group for the Cal State LA community warned students that someone is going to “shoot up the library.” Students were then informed by the university about the potential threat over two campus-wide emails sent on Monday by the Department of Public Safety. Text messages and emails starting around 1:45 p.m. warned of a potential threat. Messages around 3:14 p.m. updated the situation: “There have been unsubstantiated and unconfirmed reports of threats to campus safety.”

Fifth-year student Rebecca Galean didn’t feel like the threat was serious because her professor didn’t take it seriously.

Other students, like second-year Uriel Cipriano, learned about the news only after getting out of class.

“I just got out of my midterm. I looked at my phone, and that’s the first thing I get,” said Cipriano when finding out about the threat. “I got the message pretty late. Regardless, I’d say it’s weird that it got to the point… I didn’t see this happening here.”

When hearing that both threats were “non-credible” and “unsubstantiated,” Cipriano was concerned that it could just be a joke: “If someone is doing it as a joke, that shit is not funny. There’s people that actually go through this stuff.”

Some people wondered if a student might have created this rumor in hopes of canceling class.

“I think everyone is going through a lot right now,” said Cinthia Espinoza, a Cal State LA Public Health student, when asked about the possibility of a student attempting to cancel class. “[It] can be stress here at school or outside of school, too. I think there can be students going through [emotional and mental hardship so it] can probably lead to a lot of stress and can make these types of stuff [happen].”

Espinoza said she should have paid more attention to her emails. Otherwise, she wouldn’t have come to campus.

Second-year student Ashley Vargas was in the University Student Union (U-SU) when the rumors came in. She said she looked around, but no one was doing anything despite the text and email updates.

“Everybody was just so confused because everyone around us was so calm and everything,” said Vargas.

Despite the threats being non-credible, students still have their guards up. Vargas added, “Whether it’s fake or not, you can’t risk it. You can’t just ignore it.”