Student Veterans Take Their Next Steps After College 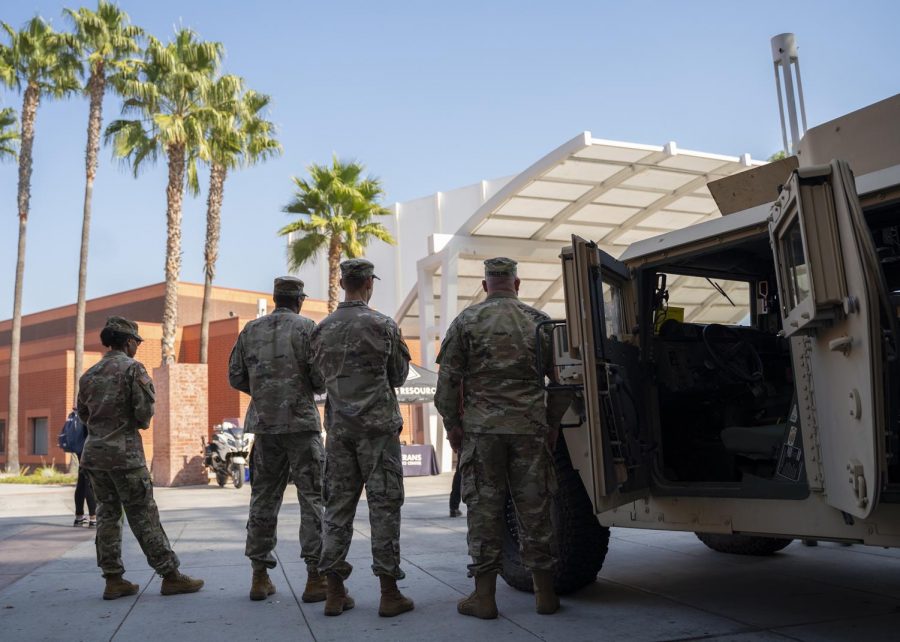 People in uniform stand side-by-side each other next to the parked Humvees.

At his first job after returning home from military service, Ali Tayyeb and his co-workers were asked to stay late to organize the shelves of the sporting goods store. “Of course, I’ll do it!” Tayyeb agreed immediately. All of his co-workers clocked out. That was the first time he realized that he “actually had a choice.”

“The civilian community is often puzzled by us and we are often puzzled by them,” the Cal State LA graduate said at the university’s annual Veterans Day Ceremony. The event on Thursday was at the University-Student Union plaza, where several information booths as well as a large military vehicle were set up for the occasion.

President William A. Covino introduced the three Golden Eagle veteran guest speakers and paid tribute to the role of Cal State LA’s Veterans Resource Center in supporting veterans and military-connected students in their pursuit of higher education and helping them  “work to recreate their lives as their service ends.”

He pointed out that among the graduated Class of 2019 were a total of 129 veteran students who graduated.

One upcoming graduate,  Sandy Hernandez, a first-generation veteran and first-generation college student,” who after four years in service, decided to major in business at Cal State LA. In her speech, she emphasized how the Veterans Resource Center has made her “feel welcome during [her] time as a transitioning veteran student.”

Educational benefits were the reason why Albert Dabney, who was raised by a veteran father, joined the Marines in the first place. During his years in service, he experienced different cultures and afterwards pursued a Bachelor’s degree.