Dozens of Cal State LA students and faculty members met last Tuesday to support a demonstration for migrants and their families as a response to a anti-immigration speaker on-campus. 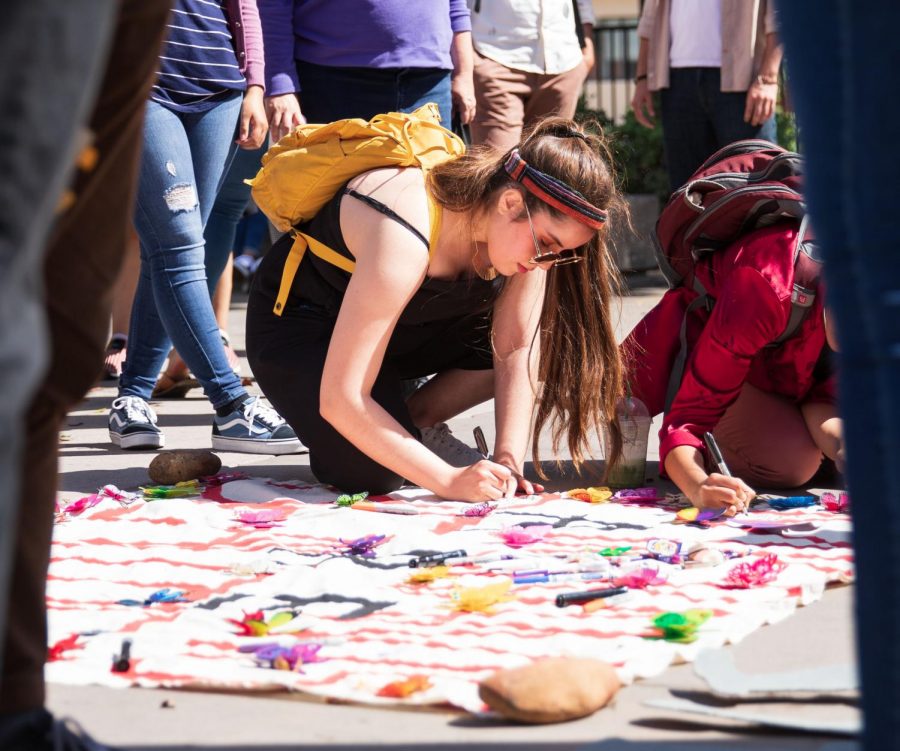 Joselin Castillo writes down on the healing circle.

Sounds of the unity clap filled the campus as students of the Latinx community circled around the Golden Eagle Statue to build solidarity and establish a sense of community.

On April 23, conservative actor Michael Knowles was invited by the Young Americans for Freedom (YAF) club to give a speech on America’s border security and “Building the Wall.” As a response, a group of Chicano Studies students, Mujeres Activas en Letras y Cambio Social (MALCS), held an event to support each other instead of protesting YAF and speaker Knowles.

“We feel like this is an attack on our campus, even if it’s psychological violence, it’s still violence,” said MALCS member Cynthia Alonso. “It is triggering and it is violence against our students on-campus because we have the highest percentage of dreamers in the California State University (CSU) system.”

MALCS is a student organization that works to support the education and political knowledge for Chicana/Latina and Native American women’s issues. Participants at the “Migrants are Beautiful” demonstration were able to share their stories and read about others who are dealing with the same stress and trauma of deportation.

“I appreciate this campus for providing us with this event,” said student Antonio Gutierrez.“This campus is filled with migrants and we’re grateful to have this outlet.”

Not too far into the peaceful demonstration, a supporter and friend of Michael Knowles joined the group with the hopes of interviewing Cal State LA students and their views on immigration.
He was not welcomed.

The unnamed YouTuber brought along a cameraman and made his way to almost every participant even after being told to leave by many Cal State LA students and faculty.

“It’s not right. This event is for us and we are trying to create a sacred place,” said Cal State LA Chicano Studies professor Theresa Yugar.

“We’re not disrupting their event so they shouldn’t be disturbing our’s,” one student said.

Participants became reluctant to speak to other reporters and journalists at the demonstration, fearing their intentions.

Despite his presence, the event continued on as students socialized, wrote their personal stories on cardboard cutouts, and wrote down the names of the women who give them their strength and energy on a canvas decorated with monarch butterflies—a representation of migrants.