Students hope for improvements on mental health services on campus 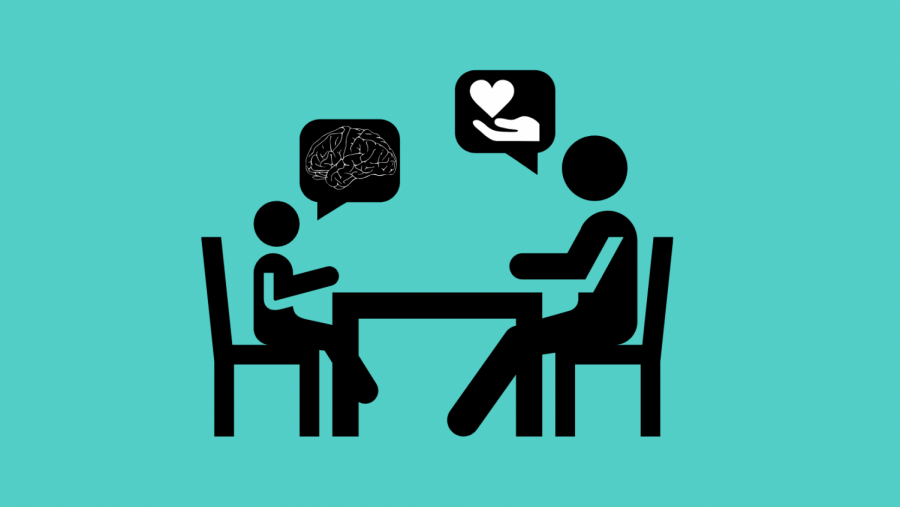 This image was made by Camille Jessie through Canva using Sketchify elements.

Ezmee Gollas, a kinesiology major, said she saw a Counseling and Psychological Services (CAPS) psychiatrist in Fall 2019 and that it felt like an “uphill battle” just to make an appointment. “I had to miss class on occasion to get a chance to speak with him,” said Gollas.

Although appointments with the psychiatrist were helpful, Gollas said she found it sad that students have to wait months for an appointment or have to miss class just to see a professional. She added that she hasn’t used any CAPS services since COVID started, but that she plans to visit them in the future. Now that the Associated Student Inc. (ASI) resolution for CAPS is in place; these issues may not be a problem for students anymore.

“We started talking to students [and] a lot of them were saying that they weren’t getting their full session time,” said ASI president Diana Chavez. “Sessions were cut down to 20 to 30 minutes and counselors were canceling on their students. It was an inequitable service and something needed to be done.”

The team of four drafted the Resolution on CAPS (Counseling And Psychological Services): Transparency and Mental Health Service Standards, which was then passed by the Academic Senate of the California State University in December 2020.

Before the ASI resolution on CAPS was passed, Chavez said that Cal State LA’s student-to-counselor ratio was 1:3292. When it was officially passed by the Academic Senate of the California State University (ASCSU), two more counselors were hired making a total of 10 counselors and a ratio of 1:2395.

According to the International Accreditation of Counseling services (IACS), campuses should maintain a 1:1000-1500 ratio in regard to mental health services. The director of CAPS Jonna Fries sent the UT a link showing that CAPS is still looking to hire more counselors.

This is good news for students like Gollas whose concerns of CAPS included the lack of counselors. Gollas added she would “emphasize group therapies and have them advertised more [since she] didn’t know about other forms of counseling until [she] had made [her] appointment.”

When learning about the concerns of students, Chavez and the team of students said they found that the use of handcuffs and police involvement was another underlying issue.

According to Chavez, if students are found to be a harm to themselves and others, they are handcuffed and searched for weapons before they are transported to a hospital. She stated that this is due to none of the CAPS directors or employees being certified to handle these students.

Chavez said she hopes that the Academic Senate will hire counselors in the future that are certified to handle these students, a request that’s also listed on the resolution. However, according to her, due to the CAPS budget at the moment, it isn’t possible.

Since the Los Angeles Police Department isn’t required to receive trauma-informed training, the resolution recommends that the university publicly publishes the “handcuffing” policy that the Cal State LA Police Department uses for “students found to meet the legal criteria for danger to self or others.”

Chavez said that the police department doesn’t use that procedure on students anymore but because it is a policy, they want it eliminated for good.

According to Chavez, the resolution did request to eliminate workshops for students that need a therapy session. The resolution requests this because of the issue students had to go through to get a one-on-one therapy session.
With only so many counselors hired with CAPS, students were told to go to multiple workshops in order to eventually get the one-on-one session they asked to get in the first place. Chavez said she still thinks workshops will be helpful to have for all students but should not be a requirement.

“Last semester was when it was the most helpful to me. I took seven classes and I needed somewhere to de-stress. My counselor, who understands me, was very helpful and I found that it was a great resource,” said Hazel Carias-Urbina, an undeclared student.

Carias-Urbina didn’t have to go to any workshops when she scheduled her first appointment with CAPS in March 2020. She added that she has not had a problem with CAPS and that she wouldn’t change anything about it.

The resolution also states the advantages of having an internship program with CAPS. Chavez said the program would not only help tackle the issue of the student-to-counselor ratio but it would also benefit students who are into social work. Chavez also shared that a virtual internship program for students is currently in the works.

CAPS is currently offering teletherapy: a method of mental health care that is provided electronically to students. This includes both video conferencing and telephone calls allowing CAPS to continue to provide psychotherapy while practicing social distancing.

Students who reach out to CAPS are required to go through an assessment so a counselor can determine the students’ level of risk. Based on the results of the assessment, the student will either be booked for a one-on-one or sent to a workshop. They are also working on making an online forum to make contacting CAPS simpler.

If students have questions or are seeking to make an appointment with a CAPS counselor, they can call (323) 343-3300.