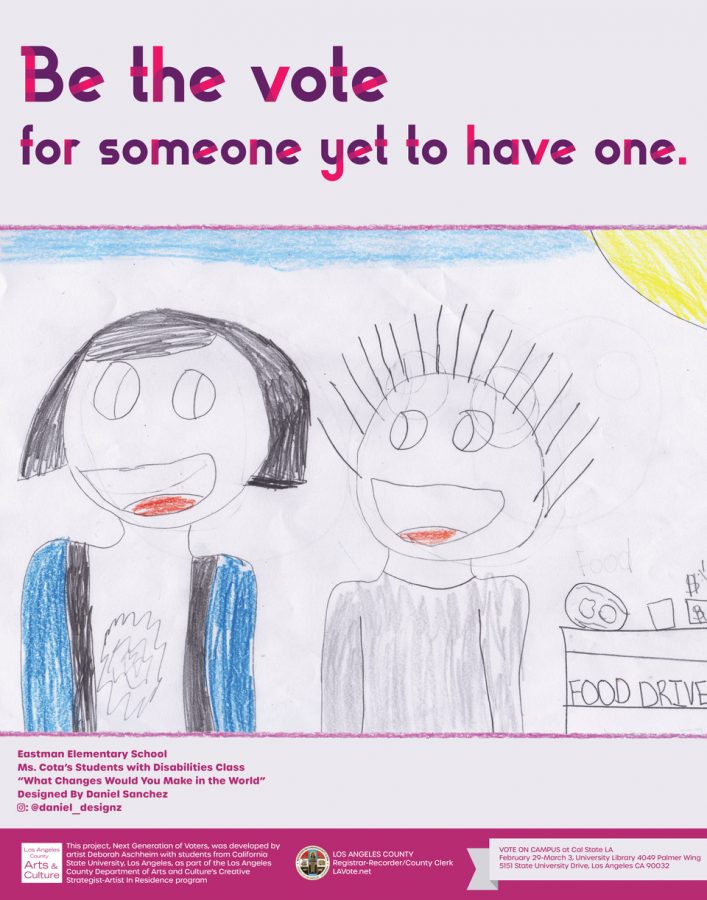 Daniel Sanchez, a graphic design major, crafted his artwork based on the drawings of children with special needs. Coordinating with a behavioral specialist and their teacher, he also interviewed them to learn what kind of world the children want to see. Each of his art pieces contains the slogan: “Be the vote for someone yet to have one.”

Golden Eagles are collaborating with Los Angeles County for the California primary on March 3, otherwise known as “Super Tuesday.” The campus will be one of many voting centers across the county. Along with the new voting center locations comes new touch–screen technology, and extended voting periods, all to encourage turnout and improve accessibility.

That’s not the only trick up the county’s sleeve. Cal State LA arts and graphic design professors and students are a key part of the collaboration.

Deborah Aschheim, creative strategist for the Los Angeles County Registrar-Recorder/County Clerk, invited the school’s art department to participate in the county’s initiative by designing ads in hopes of encouraging civic engagement. Aschheim’s mission is to boost voter turnout among marginalized communities that tend to have lower turnout rates.

“Students, in and of themselves, are an underrepresented group,” said Aschheim. “Every election, there’s lots of hand–wringing that students didn’t vote in the numbers that we had hoped to see. So, they are already a very important target group for the registrar-recorder. That’s one of the reasons why we have voting centers on campus.”

She added that young people are the inheritors of today’s voting and legislation, hence the importance of student engagement.

Ian Evenstar, an adjunct graphic design professor, merged his class assignments with Aschheim project’s goals. Despite being a project conceived outside of the syllabus, the learning outcomes are the same and the student designers have benefited from picking up new skills, said Evenstar. There are additional benefits, he added.

Yamizel Curiel, a graphic design major, was looking forward to having her art displayed for voters to see. “It was just a great experience and really motivated me to not really give up on that perfect” career I’m pursuing, said Curiel.

Her artwork included a landscape of mountains with text urging people to “Vote for the people who won’t see [the] Earth like this.” She considered it a call to vote and to address climate change. Curiel’s time on the project has boosted her confidence as she prepares to join the workforce after graduation this spring.

It’s been a rewarding experience for faculty as well, including Lynne Berman, an art professor. She noted her students were quiet and reserved in the early weeks of the semester but noticed a change in attitude once the projects commenced.

“We were only two weeks into the semester, people were kind of still reserved” but once work started on the project, the students became “very animated and people were really putting themselves out [there] and letting their personality shine,” said Berman.

The art project presented a special challenge for Karen Morales, a graphic design major. Her mission was to encourage voter turnout — but she herself was not engaged in civic matters. She asked, “How do I [target] someone like me?” when brainstorming ideas. Morales has become more inclined to vote and participate as a citizen as a result of the project. Another reason why she has become more invested in voting is because of her seven-month-old sister.

“I’m doing this for her,” she said. “I want her to see that her big sister can still make a difference, even if it’s something so small… I’m more engaged now than I’ve ever been.”

The future was also a theme present in the artwork of Daniel Sanchez, a graphic design major. The inspiration for his work came from drawings from children with special needs, who he also interviewed. After coordinating with a behavior specialist and their teacher, Sanchez crafted images that depicted the world the children want to see.

A slogan on each of his art pieces reads: “Be the vote for someone yet to have one.”