The explosion that transformed a neighborhood 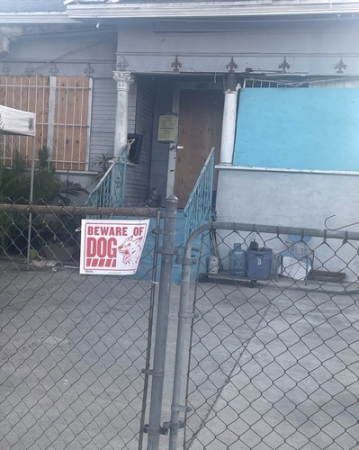 Photo of boarded up home, courtesy of Xennia Hamilton

Earlier this year, in a South Los Angeles neighborhood near 27th and San Pedro streets, there were blue and pink Victorian-style homes and children playing on backyard trampolines under warped orange and avocado trees.

Now, some of these homes are a mangled mess of balsa wood patches and shards of broken glass in windows where happy memories once flashed through.

This is why June 30, 2021, will forever live in the hearts and minds of many neighborhood residents. On this day, the Los Angeles Police Department responded to a tip about 26-year-old resident Arturo Ceja III illegally storing many pounds of fireworks and explosives in his home. As officers removed the fireworks, they determined it would be safer to detonate these explosives on site rather than haul them away.

What resulted was a scene of devastation: 27 people were injured because of the explosion, including 18 civilians, eight LAPD officers and one Bureau of Alcohol, Tobacco, Firearms and Explosives agent, according to a recent ATF report.

More than 30 homes and businesses were destroyed. The impact was visible: Blown-out cars, shattered glass, debris and police tape all around the area. And aches and heartaches from having so much taken away in an instant.

One of the things that stings most, residents allege, is that home repairs that were promised by city officials early on either haven’t materialized or they’ve been done haphazardly and there seems to be lack of transparency by the city.

On a recent afternoon last month, the local laundromat, which once bustled with life and the chatter and laughter of regulars, now felt somber and moody. Boarded up windows covered scenes to the outside world and people quietly folded clothes or stared at their phones, waiting for the end of their laundry cycles.

Throughout the street, residents have posted colorful signs on their damaged homes reading, “Destroyed by LAPD” or “Not Repaired.”

Ron Gochez, who has become a powerful voice advocating for residents on the street, said that many residents who live on the block are now in hotel rooms due to their homes being inhabitable.

“All the people you see here? Some still live on the block, some right now live in a hotel because their homes are completely inhabitable,” Gochez said.

Gochez alleged LAPD didn’t provide proper notice of a meeting on Sept. 13, 2021 with residents about the explosion because the handouts didn’t look official and could be mistaken as a simple note or very low-budget advertising.

“They passed out fliers. They put them in people’s mailboxes. It was like a super basic Microsoft Word [handout]: It didn’t say it was by the LAPD, it didn’t have a phone number, it didn’t have anything it just said, ‘Informational Meeting,’ and the address and that was it,” Gochez said. “We started digging and found out it was LAPD that was organizing the meeting and the chief of police was there, people from the ATF were present, they only allowed people from the block to enter.”

An LAPD representative did not comment on allegations about the lack of official notice and instead referred to a recent Bureau of Alcohol, Tobacco and Firearms’ report.

The report, on agency’s investigation, found that the LAPD’s Total Containment Vessel, normally designed to withstand heat and pressure when bombs and explosives are detonated inside, was overloaded with the bulk and weight of the fireworks inside.

The vessel was only designed to withstand a blast of up to 26 pounds but the LAPD’s bomb squad placed almost 40 pounds of fireworks and explosives inside.

Gochez said residents are upset that the names of the LAPD employees responsible haven’t been released: “When the suspect was arrested, his face, his name was plastered all over mainstream media, and we think the people responsible for this deserve the same thing.”

Ernesto Marquez, an older Latino man donning a cowboy hat, sat in his truck, gazing out at the scene at his peach and cream one-story Victorian-style home. Repairs are being made, he said, but they’re being done shoddily. In the meantime, he and his daughter had been living in a hotel room for two months.

However, he and many others have not received anything to repair their homes as promised by the city-hired contractor and LAPD, according to Marquez. “You see the house? The blue house? [They] repainted it. But he put two different windows” in, Marquez said in broken English.

What’s most painful to Marquez is that his mother had put in hundreds of hours of labor and love into the home: “My mother did all of it. So, all new stucco, new drywall, new electrical, new drains, new water, everything, you know.”

Letting out an exasperated sigh, he said, “Now, everything is gone.”