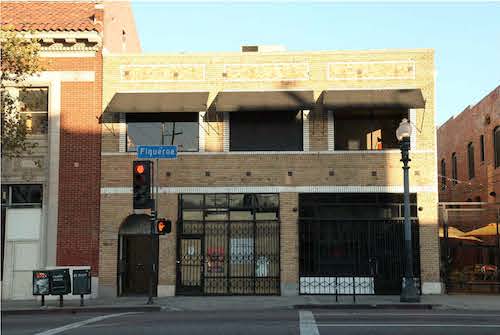 Photo of 5605-5607 N. Figueroa St., where the nomination for the Historic-Cultural Monument for the Centro de Arte Publico is located. Photo courtesy of the Los Angeles Department of City Planning in a "recommendation report" for the Cultural Heritage Commission.

Highland Park and Northeast Los Angeles was once a massive hub for Chicano art and activism.

Many of the most influential Chicano artists of the 1970s came together and created the two most influential art centers in Chicano history: The Centro de Arte Publico and Mechicano Art Center.

The Highland Park Heritage Trust has nominated the buildings that previously housed these art centers to be designated as “historical-culture” monuments. The nomination has not been approved through the city’s Cultural Heritage Commission, so the trust is asking the Highland Park Neighborhood Council and community members to help rally support for the idea.

The council tabled that agenda item at its regular board meeting in December, leaving some community members and presenters disappointed.

“We did not specifically seek out the support of only the neighborhood council, but from any person or organization of the community who believes in this cause and is moved to show their support,” said Jamie Tijerina, the president of the Highland Park Heritage Trust.

Having these buildings designated, along with the over 1,100 other locations that are recognized as Historic-Cultural Landmarks, would help affirm and reinforce that Chicano History is important and necessary to preserve, according to the organizers.

The art centers were created as the community was still reeling from the negative impacts that the Vietnam war had on their communities. As a result of the political and social struggles taking place during this time, many of the artists used these struggles as inspiration and created some of the most historically significant Chicano art pieces.

Two stories from KCET on The Centro de Arte Publico and Mechicano Art Center detail the rich history that took place at these centers and the impact that the works that were created there had on the Chicano community.

These art centers have now been closed for a number of years, however, the original buildings that both of the centers occupied are still used today, one as a small community market and the other as a recording studio.

“Once you know your history, it gives you a certain amount of pride in who you are,” said

Kathleen Gallegos, the founding executive & artistic director for Avenue 50 Studio, said in an interview. “It’s important for the well-being of the Latino community here in Highland Park, specifically the artists that came here because Highland Park has always been known as an art community.”

Avenue 50 is an arts organization and gallery grounded in Latino culture and has worked to encourage community members to learn about and celebrate Chicano Art history.

These buildings are not under any immediate threat because they’re within the boundaries of the Historic Highland Park – Garvanza Historic Preservation Overlay Zone HPOZ, which protects these areas from any major renovations that could alter their historic feel.

If the Cultural Heritage Commission approves the Highland Park Heritage Trust’s application, it will further protect these buildings and acknowledge how important these locations were for the Chicano movement.