The Future is invisible 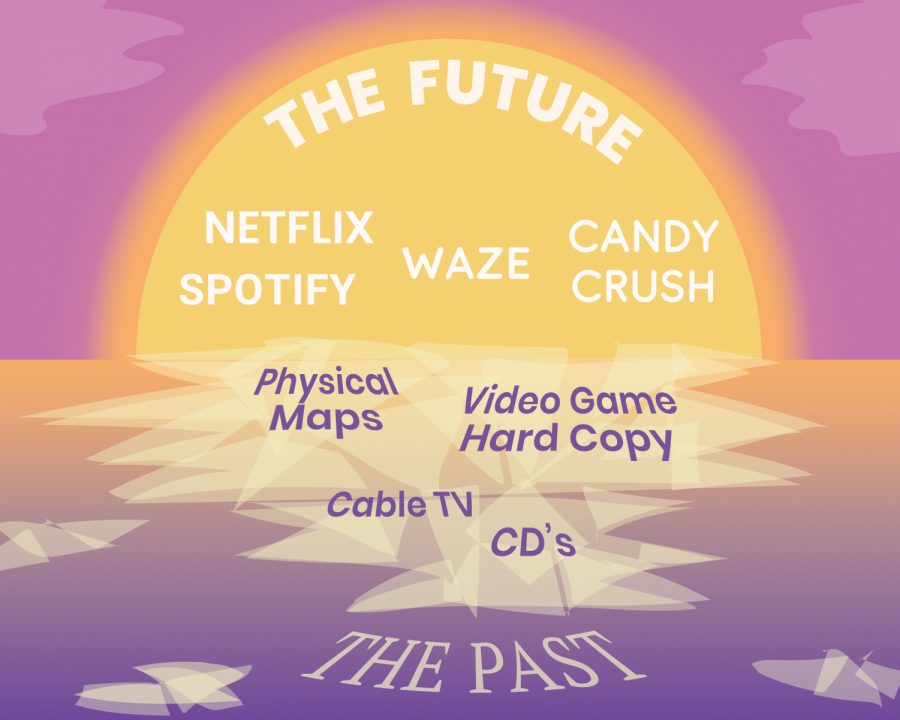 On Monday, an on-campus speaker was introduced as a “futurist.”

Robert Tercek, author of the book “Vaporized,” gave a talk on the future of society. He argued he is not a “futurist,” but is, in fact, a strategist that prepares and analyzes where the future is heading. He started the seminar with a simple greeting of the future:

Tercek introduced the concept “vaporized” or dematerialization; that is, replacing physical tools for digitalized ones. He unpacked an abundance of information in his hour and thirty minute lecture, but one thing he hopes for students to understand is that “every physical product can have a digital service attached…I think it’s very important to focus on sunrise industry and not sunset industry. Sunrise industry, is an industry that is growing. Sunset industry is one that’s passed its zenith, and it’s going to descend.” Tercel continued, “You don’t want to work in an industry that’s passed its zenith, there will be diminishing opportunities there.”

Tercek explains that products are vaporizing in a way that is seemingly invisible. Claims that consumers do not notice the change, but it is in fact happening. Some examples of vaporized products that Tercek shared are:

Music Industry: The purchases of CD’s have decreased now that services are provided by Spotfy and Apple Music.
Maps: With the concept of Google Maps and Waze, the reliability of physical maps are not as necessary as they once were.
Game Industry: According to Tercek, the video game world has changed since the creation of mobile games. He adds that people can access games through their phones and no longer need to buy physical hard copies. Additionally, the concept of mobile games started the trend that games can be free and pushed companies to create demos of their games for people to try before playing.
TV Industry: The cable industry is being vaporized, says Tercek, due to streaming services like Netflix that offer ad free entertainment for an affordable price; therefore, people lean more towards it.

According to Tercek, “since 2016, 81 national chains have closed.” The new form of advertising is by the products themselves.

An example of the new way of advertising is through the wine brand “19 crimes.” The wine bottle’s logo are images of criminals who were turned into colonists, a punishment that started in 1738 where criminals were sent to Australia. The wine bottle allows consumers to scan the bottle’s logo with their smartphone which then reveals the story behind the person’s conviction.

Scanning is not only planned to be a part of the advertisement world, but also for daily life. Tercek brought up an example of a jet engine from General Electric (GE) that has sensors and data. The sensors’s purpose is to transmit data if the engine is malfunctioning. This allows the engine to be fixed as soon as it gets to the airport.

With advancements in technology, there are of course some worries of employment dropping and fewer job opportunities.

Tercek addressed that humans handling physical activities could potentially be safe, as humans are able to handle, grab and shape products that machines cannot. But he also added that humans need to prepare and adapt.

“Robots and artificial intelligence are moving fast. So, the good career management strategy isn’t, ‘How do I stop the robot?’ or ‘How do I make myself future proof?’ Because, those are not likely going to happen. The better one is ‘how do I best work with this robot to be even better?’… It’s also true that some jobs will be replaced, and it’s also true that those jobs are, surprise, surprise, machine like. If you have a job that pretty much a machine can do, then chances are it’s going to get automated,” said Tercek.

Tercek’s goal was to enlighten the students on what they have to face ahead.

Maria Karafilis, director of Cal State LA’s American Communities Program, said she invited Tercek to speak on campus to “inspire students to think about what the future will bring. And how they can best prepare for it.”

Alberto Benavides Jr., a sociology major who attended the lecture for class, believes that Tercek was successful in making the audience think about the future.

“I’m graduating this summer, and I have been thinking about what my next step is,” said Benavides Jr. “So this was definitely a way for me [to think] of where I’m going, what to look forward to, different opportunities at least. Everything is going to have some sort of data thing, and I never thought of it like that.”