The Golden Eagles get much needed victory 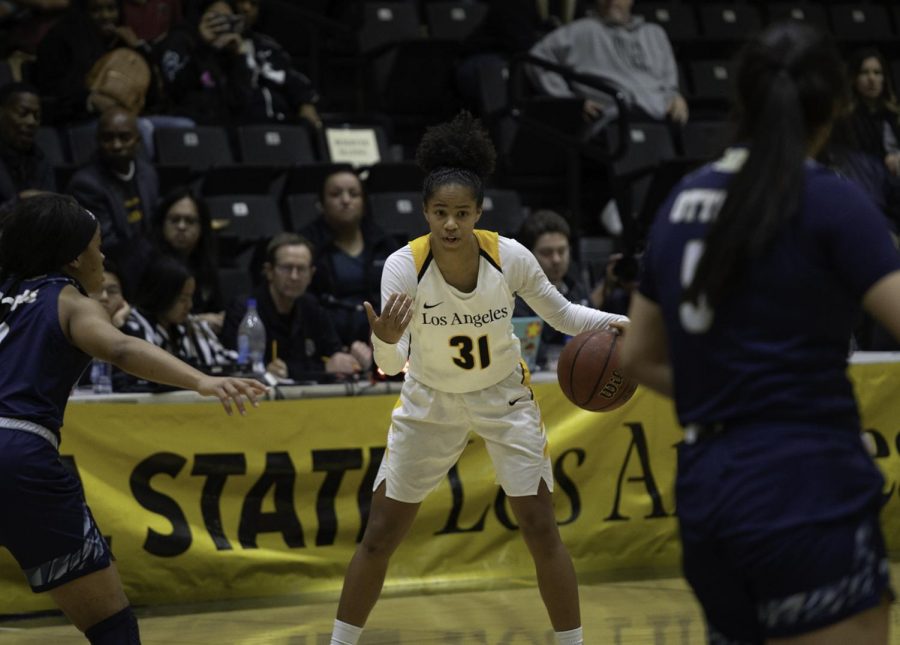 Nicole Flennaugh (31) motions her teammates across the court as the opposite team surrounds her.

On Saturday, the Golden Eagles women’s basketball team snapped a three game losing streak at home against Cal State East Bay. They won by a final score of 70-62.

“This was just to you know show that we can compete with anybody and that’s what we showed today,” said point guard Alyssa Fisher

Fellow guard Sydney Bordonaro led the team with 16 points, and six rebounds. The squad also got contributions from Alyssa Fisher with 14 points, shooting guard Nicole Flennaugh with 13 points, and combo player Mackenzie Barnes who had a double-double with 13 points and 12 rebounds.

However, it wasn’t perfect for the eagles, they struggled from beyond the arc as they shot a mere 23.8% from the three point line.

“I mean in general we are a pretty good shooting team every once in a while we have an off game. I mean we found other ways [to compensate] for our lack of our shooting,” said Flennaugh.

Head coach Torino Johnson also talked about the team’s low percentage shooting. “Well we have to keep working on our shooting. There’s a certain toughness in making shots and we’ll develop that. It’s something you cannot develop day and night, and we have bad nights,” he said.

In the first half of the game the black and gold struggled with shot selection, and made a number of mistakes. Cal State East Bay was getting the better of the Golden Eagles both offensively and defensively.  However, by the second half of the game the birds rallied back and out scored the Pioneers 21-13 in the fourth quarter.

Fisher had an impressive second half, hitting three jump shots, and helped break some of the pressure on Flennaugh and Bordonaro when the Pioneer defense tried swarming them.

“It was something I needed, to see the ball go in the basket and [to] see my teammates and the other team. You know when Nicole and Sydney are getting face guarded they’re another option to make shots. I think I showed that today,” she said.

Cal State LA will be heading to San Marcos next, to play against the Cougars on Thursday at 5:30 p.m.