The River That Connects Us All 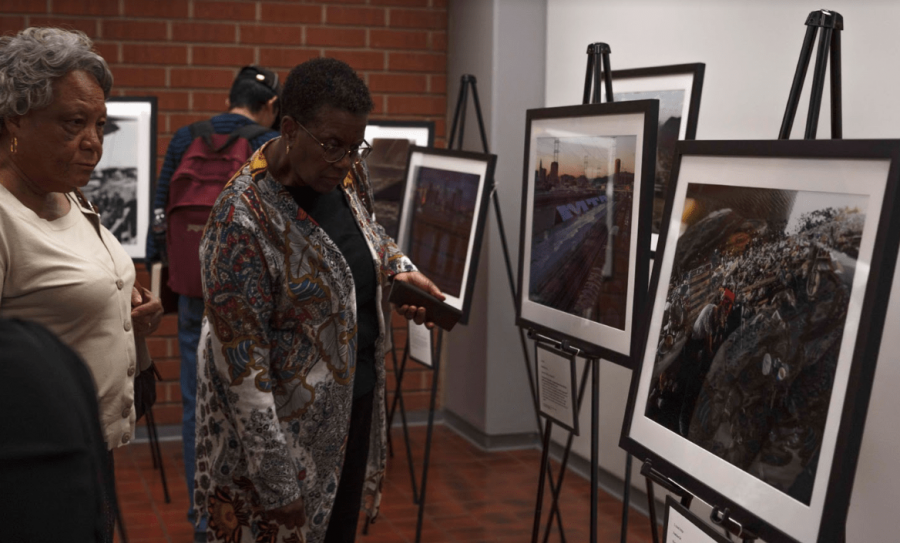 Photographs of the Los Angeles River on display for people to view at The L.A. River- The Past, the Present, and the Future exhibit last Wednesday in the University Library. Cal State L.A., 2019.

The Los Angeles River connects all the cities, running from the Simi Hills through Los Angeles, and ending in Long Beach.

Cal State LA hosted an art exhibit documenting the history of the waterway.

“The LA River: The Past, The Present, And The Future” is a collection of photos that spans decades, provided by the staff of the LA Times.

“We assign photographers to cover stories on the LA River on a regular basis. When you put a group of photos together covering 50 years or so, a portrait emerges that shows a great transition,” said Jeremiah Bogart Jr., senior editor of visual journalism.

Bogart added that the photos revealed clues about changes in social values over time.

Each of the pieces were picked by Dr. Choi Chatterjee and her fellow curators to tell a larger story about the city’s relationship with the man made channel, like “Children Play in the River” by Luis Sinco and “LA Walk” by Christina House.

“We are accustomed to seeing isolated pictures of the LA river that tell only a part of the story… our exhibition shows how the channelization of the LA River in the 1930s brought an end to the periodic and devastating flooding that used to occur, but it also destroyed the essence the river,” said Dr. Chatterjee.

She hoped the exhibit would inspire students to walk along the stream and volunteer for revitalization projects that are underway along its banks.

Students were quite impressed with the efforts of the exhibit, like graduate student Ariel Hernandez.

“They’re really an interesting collection of photographs. I grew up in Chicago and so the city has this really interesting relationship with its river. A lot of the photos remind me of the evolution of the Chicago river,” said Hernandez.

“We think of the LA River as one big ugly, concrete channel going all the way to ocean. In the past, it wasn’t concrete. It looked like an actual river. I’m glad we’re taking efforts to return the river back to its natural state,” said Wurangian.

“The LA River: The Past, The Present, And The Future” will be displayed in the North Wing of the University Library on Level A from April 10 through May 1.