To love or not to love?

Students have mixed feelings about deep relationships in college 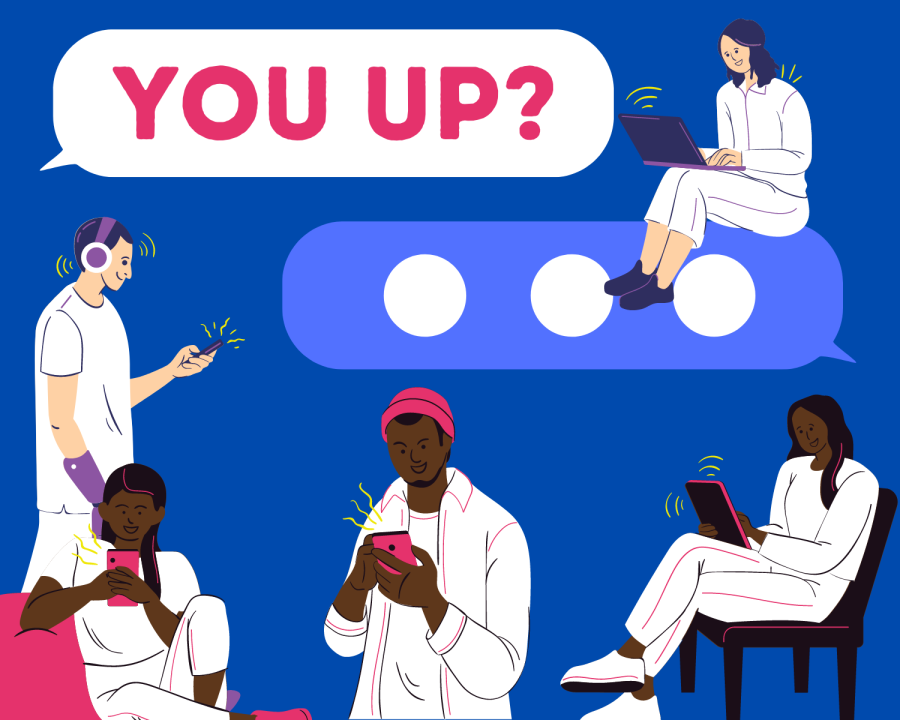 Technology allows romantic partners to communicate at all times of the day.

A message that many send and receive daily. Dating in college could look different for students across generations. When it comes to dating, some learn valuable lessons that lead to making better decisions later in life, some find love and others find themselves. However, these lessons aren’t on any syllabus.

Students interviewed focus on the pros and cons of dating in college while reflecting on the role that technology has on their dating lives. Dating in college has its perks but it comes with a price, which is time. Students also shared accounts of relationships that are energy draining.

Yajaira Cervantes, a sociology major, said she was in an abusive relationship while attending college that really hindered her schooling.

“It could be good if the person you’re dating is supportive and understands that you are a busy college student,” Cervantes said. “But when the person you are dating only gives you distractions, then that could be bad and also lead to conflict.”

When Cervantes looks back at her experience, she wishes she could tell her younger self to not have dated when she was halfway through college.

“I’ve dated the wrong people at the wrong time, which led me to be behind in school and gave me a lot of emotional distress,” she said. “It interfered with my school performance and at work. I was dating someone who was abusive and manipulative. It was a bad journey I had and I was 20 years old at the time. I was afraid to tell anyone.”

Cervantes’ story is not uncommon for college women.

One in three college women say they’ve been in an abusive dating relationship and 57% of college students who report experiencing dating violence and abuse said it occurred in college, according to the National Domestic Violence Hotline website.

Criminal justice major Daniel Gonzalez believes that dating in college usually represents the two extremes, either comforting and casual or finding your significant other.

“In my experience, dating has been very casual,” he said. “Many people nowadays don’t label themselves and that was the same for me. I think realistically relationships take time away from my future and myself. A relationship is an extra commitment that requires much attention aside from the workload from school and the other jobs.”

Gonzalez thinks that technology is a big factor in the dating life of this generation. Many college students use social media platforms and dating apps to pursue relationships such as Tinder and Bumble.

Cervantes believes that technology could be very dangerous when it comes to dating. Many students interact with people online that they don’t even know and share personal information. 36% percent of dating college students have given a dating partner their computer, email, or social media passwords; these students are more likely to experience digital dating abuse, according to the National Domestic Violence Hotline website.

Criminal justice major Nelson Orellana believes that social media paints pictures of perfect couples who are happy when in reality that is nowhere near what is actually going on.

“I tend to overthink which really affects me, school and my relationship,” Orellana said.

“So I stay away from longterm relationships. I know I’ll meet someone I’ll want to be with but I am not ready for that yet.”

Adrian Patos, a public health major, thinks that technology makes relationships more accessible to everyone and gives students a sense of belonging that could lead to possible dating relationships in the long- term. However, most of his interactions online have been platonic.

Patos believes that by being in an intimate relationship, people can learn and exercise communication and empathy.

“Dating in college helps one realize what you value in a significant other,” Patos said. “This leads to overall growth because you are able to identify your own values as well.”

“Sometimes it’s nice to have someone to talk to after a long day,” he said. “However sometimes relationships can be a bit much to manage as it can be overwhelming trying to switch up from an academic mindset to a more personal one.”

Patos and Orellana both feel that a healthy relationship is one that has trust, honesty and communication.

“Abusive relationships come in so many forms such as physical, emotional, and psychological,” Orellana said. “For example, restricting a partner from communicating with others can damage social relationships. I’ve lost so many friendships because of that.”

Over half of all college students say it’s difficult to identify dating abuse, according to the National Domestic Violence Hotline website.

Patos and Orellana also both emphasized that understanding boundaries and having respect for one another is what is needed for a relationship to work.

“An abusive relationship is one that obstructs personal growth,” Patos said. “The relationship becomes the primary thing that consumes most of a person’s energy. They can be one sided and unbalanced and can lead to mental health issues.”