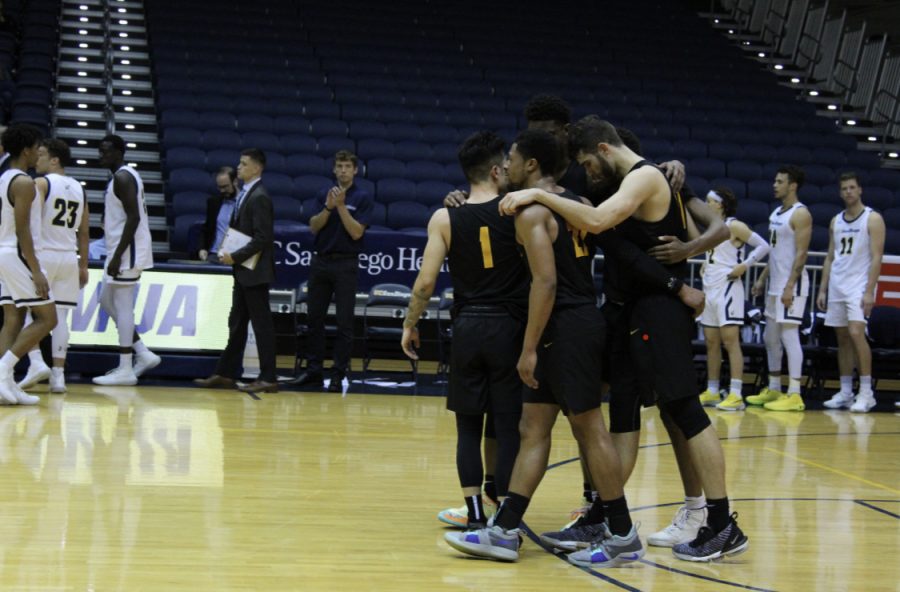 Seniors huddle together as their time runs out with the game clock.

The Cal State LA men’s basketball team’s playoff run was over before it began. On Tuesday, the team fell in a first round match-up to number one seeded UC San Diego, in their court, with a final score of 89-70.

The Golden Eagles ended their season with a 13-16 record, and a 8-14 record in conference play.

For the final time in his Cal State LA basketball career, guard Fard Muhammad led the team in points with a game high 17 points. Behind him was junior guard Michael-Isaiah Ajiboye with 16 points and four rebounds.

Also, in their last seasons as Golden Eagles, forward Ja’sean Lewis had 10 points and seven rebounds, while guard Khalil Williams had 10 points.

Cal State LA faced a very tough opponent in UC San Diego. The Tritons are the number one team in the CCAA tourney and proved why. The team’s defensive presence was on display right from the jump.

Cal State LA was up 3-2 in the first two minutes after a three from forward Jordan Rogers, but the Golden Eagles didn’t score again until the thirteenth minute when a three by Williams made it 16-6 in favor of UC San Diego.

“They’re just a great team that has a chance to win a national title. We were just not at their level from all areas of the game… We tried to pressure and got back into the game a little bit and played some good basketball, but they just got too many weapons,” said head coach Jim Saia.

Cal State LA narrowed the edge in turnovers over UC San Diego as they committed 10 compared to the Tritons 15. The black and gold were also very efficient from the free throw line going 11-12, while the Tritons went 16-22. However, the Golden Eagles only shot 35 percent from the field, and were out-rebounded 42-24.

Coach Saia expressed that what he enjoyed about the season was “the level of camaraderie.”

“The thing that I am proud of is the culture we have built for years, the love these guys have for one another, and how hard we play and practice,” said Saia.

A vocal leader throughout the season, Fard Muhammad, expressed the same sentiment as he exits his final year with Cal State LA men’s basketball. “One thing Cal State LA taught me was to appreciate relationships. I’ve never had a relationship with my teammates like I did here,” he said.

In addition to Muhammad, this was the final game for seniors Ja’Sean Lewis, Khalil Williams, Shacquille Dawkins, Jordan Rogers and Bailey Kikuchi. At the end of the game, the seniors huddled together as the clock winded down to the end.

Muhammad offered some final words about his journey with the team. “The only thing that mattered was us sitting there hugging each other in the end. Like at that moment nothing mattered. All that other stuff got diminished. It disappeared… that was all I needed at that point.”