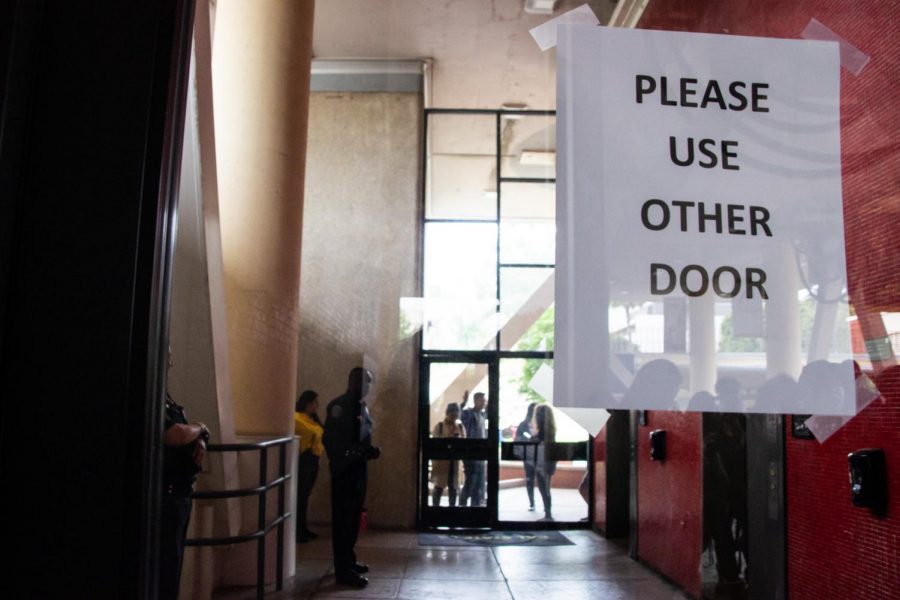 Campus police guard the Administration Building doors due to student organizations' attempt to occupy the offices of President William A. Covino and Provost Lynn Mahoney after the Resolution of No Confidence in President Covino was rejected by the Academic Senate in a 22-21 vote.

Cal State LA’s Academic Senate held their last meeting of the semester on Tuesday with the Resolution of No Confidence in President Covino and Key Administrators on their agenda item. The resolution was pushed through by Associated Students, Incorporated (ASI) in collaboration with on-campus student organizations such as Golden Eagle Justice, Black Student Union (BSU), Students United to Reach Goals in Education (SURGE), Mujeres Activas en Letras y Cambio Social (MALCS), and Student for Quality Education (SQE).

The arguments within the resolution state that though Governor Gavin Newsom proposed a budget of “$300 million in permanent funding and $247 as one-time funding address the backlog of maintenance and expand childcare centers,” to the California State Universities, the administration claimed that the school was underfunded and declared impaction.

In addition, the resolution explains that there are other buildings on campus that could benefit from allocated money from the state such as King Hall. The resolution continues to state that “President Covino’s tenure has negatively affected students on campus and students seeking higher education.”

Students and non-senate faculty crowded the room in support of the agenda item. Once statements began from the public and the senators, it seemed as though the meeting was going smoothly.

President William A. Covino’s absence from the meeting allowed Provost Dr. Lynn Mahoney to deliver the opening statements at the beginning of the meeting. She explained that, “I did not arrive here wanting to impact. Nor did the president who has been a champion for access.” Mahoney continued, “I came here, really, for one reason, and one reason only: to improve the outcomes for students and make this a better place for faculty and staff to develop their careers. I believe we have accomplished, actually, quite a bit of this.”

After her opening statements, Mahoney exited the ballroom and did not return for the remainder of the meeting.

The attendees of the Academic Senate meeting voiced their supporting and opposing views on the resolution of no confidence, which allowed the Senators more understanding of the agenda item.

Once voting began, a hush fell over the room as the votes rang in. The final tally was exactly 21-21; a split vote. Veena Prabhu, the Academic Senate Chair, broke the tie with a vote against the resolution. A motion was immediately made to vote on taking a revote on the resolution of no confidence. The vote was split, yet again at 50/50, though this time the number of total votes was 24-24. Prabhu broke the tie, again, with her vote against taking a revote. Chaos ensued.

Prabhu motioned to adjourn the meeting, which was seconded by a senator, causing students and faculty to then block the exists so that senators would not leave and would be forced to take a revote.

After Prabhu exited Golden Eagle Ballroom 3, where the meeting was held, the students, faculty, staff and community members in favor of the Resolution of No Confidence in President Covino and Key Administrators of Cal State LA, rallied at the the administration building in an attempt to speak with Covino, Mahoney, or any of the other key administrators who might be willing to listen.

Their original intentions were to speak with either Covino or Mahoney. Instead, after the resolution was voted down, they refused to leave the administrative offices until their demands were met.

According to Director of Public Safety and Chief of Police Rick Wall, the building was closed down, not allowing any personnel in or out until regular building hours were concluded. This was due to the public’s attempt to protest within the administration building.

The end of the regular business hours of the administration building were marked at 5 p.m.. According to the Black Student Union Live Stream, the students, who were occupying the administrative offices, were denied access to the restrooms, the food provided to them by their colleagues on the ground floor, and access to their advisor, Pan-African Studies Department Chair Melina Abdullah.

At approximately 6:50 p.m., the students voluntarily exited the administrative building due to threats of arrest.

When asked for a comment on Tuesday’s events, Covino stated in an email that, “I look forward to continuing my work on behalf of Cal State LA students. Their success remains my top priority.”