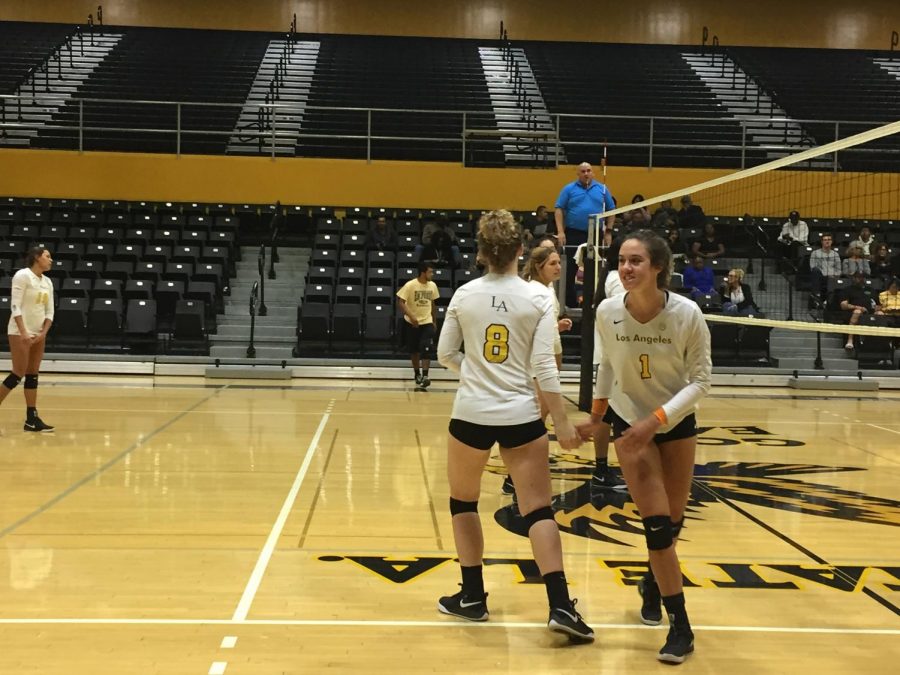 The Cal State LA volleyball squad won a hard fought battle against Cal Poly Pomona on Saturday. The victory comes after a difficult loss to Cal State San Bernardino. The team was fine with this result but not with the performance.

“I’m really disappointed. This is the worst volleyball we’ve played all year. Just a lack of effort, you know the energy was bad. We weren’t focused, we didn’t follow the game-plan. I guess the learning experience is that any team in the conference can beat you,” said head coach Juan Figueroa about his team’s performance.

The Broncos really swung the momentum in their favor in the third and fourth sets. Both of the sets were hard fought battles with Cal Poly Pomona winning the third 25-21 and the fourth 25-23. However, they probably shouldn’t have been, considering that the Broncos have a losing record of 6-15.

“I think that we went in just thinking that we were going to blow them out, which was not the best obviously. We lost focus in the [sets] that we lost, but I think we did a good job coming back and executing because we knew that we couldn’t drop this game,” said middle blocker Victoria Duarte.

The fifth set was an absolute nailbiter. There were seven ties and three lead changes. The set started well for Cal State LA after a kill by outside hitter Karla Santos gave the eagles a 4-1 lead. However, the Broncos battled back taking a 6-4 lead. Eventually they increased that to 10-6. The Golden Eagles didn’t panic and tied the set at 10-10 after a kill from opposite hitter Julia Azevedo. After a flurry of scores the game sat at 16-15 in favor of Cal State LA. A kill from Santos ended the set 17-15, and gave the birds a 3-2 victory.

“It wasn’t a good bounce back win, but a win is a win so we’ll take it,” said middle blocker Daisy Crenshaw.

Energy may have been an issue for the team since the previous night they played a hard-fought match against conference power Cal State San Bernardino. However, coach Figueroa emphasized that “there’s no excuses.”

A bright spot in the match was a standout performance from Karla Santos who had 17 kills, five aces and 19 digs. The squad also had big nights from setters Laisa Maeda and Shea McGovern who had a combined 58 assists. Duarte led the team in blocks with eight and libero Jeshmarie Suarez co-led the team in digs with 19.

Figueroa is looking for more from the black and gold in the next match. “We’re not making the teams earn it. That’s why we keep a team like that in the game with us. We just gotta learn. We’ve been practicing, we’ve been talking about it, we’ve been watching a lot of film … I’m going to have to go back to the office and see what we can do,” he said.

The volleyball team will head out on the road for a two-game swing starting Friday at UC San Diego.