Vote of no confidence… now what? 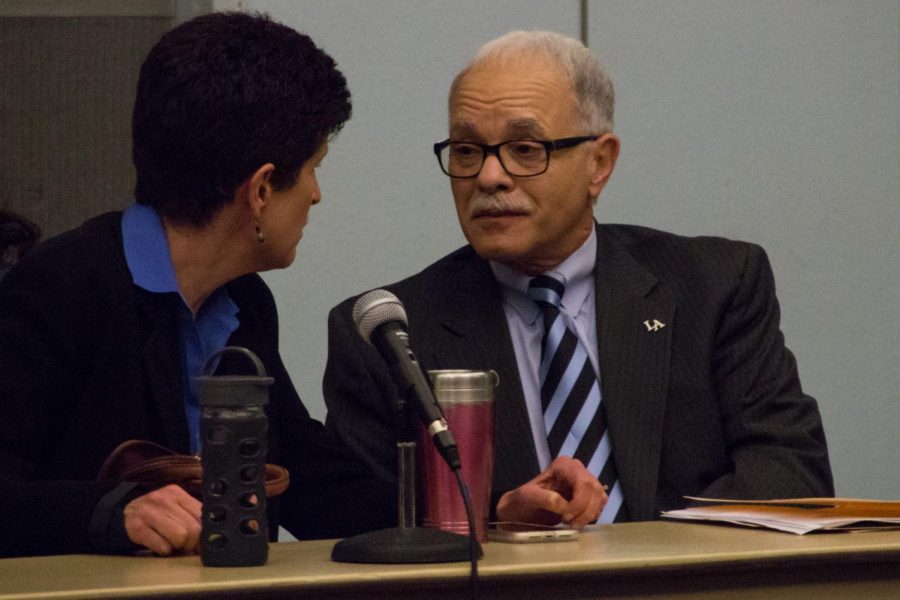 Cal State LA President William A. Covino (right) chats with another administrator at the Academic Senate meeting in 2019.

After the Academic Senate overwhelmingly voted “no confidence” in President William Covino last week, students, staff and others are wondering: Now what?

The answer: Although a “no confidence” vote is rare, it doesn’t mean there will be anything done.

The resolution, approved May 9 by 91% of those attending, took place after professor Melina Abdullah, a co-founder of Black Lives Matter’s Los Angeles chapter, was removed from a mayoral debate on campus for not having tickets.

Of those who voted, there were 40 senators who were in favor of the resolution, with two abstentions and two against.

When Covino started at Cal State LA, he engaged with faculty during faculty day. Still, it became less of a conversation after the first few years, according to multiple faculty members interviewed.

“He has created an atmosphere where faculty have no say,” Baker said. “He speaks at us. None of us see him, hear him or even speak to him again until the end of the year at graduation. Clearly, he is not interested in us. What kind of university president refuses to meet with Black faculty on campus? Particularly in these times.”

Baker reflects on the fact that back in 2019, there was another instance in which she felt the administration failed to hear the concerns of faculty when it had a vote of no confidence.

In 2019, a culmination of events led to a similar scenario; however, the vote was not as resounding.

The University Times (UT) reported on the events that transpired after the vote. Students staged a sit-in, only to leave when the police had used the threats of arrest.

Baker also said that many feel Covino doesn’t prioritize the process of shared governance. Shared governance is the process and structures an institution will go through by faculty, staff, and other community members brought in to help navigate decisions that affect the campus.

With more faculty feeling unheard over the last few years and a recent culmination of events, the academic senate has shifted its mood by 41%.

“I’m committed to continue working with our more than 1,500 faculty members to advance student success, graduation rates, and economic mobility,” Covino said. “Every day our faculty and staff go above and beyond to fulfill the mission of the university. That deep commitment to our students and our community should not be overshadowed by, or mischaracterized because of, the event,” involving Abdullah’s removal.

Baker added that the head of the Pat Brown Institute, Raphael Sonenshine, the faculty member who allegedly called the police to remove Abdullah from the debate, should also be held accountable.

A survey currently circulating was made by California Faculty Association Los Angeles Chapter, which has been reaching out to all faculty asking if they have confidence in President Covino’s Leadership, selecting yes or no.

Before the question in the survey, there was a statement that said, “The police attack on Dr. Melina Abdullah and subsequent victim-blaming propagated by Cal State LA communications are the latest examples of President William A. Covino’s leadership.”

It continues with a bullet list of items with such statements as the impaction fiasco of 2019, contracting a prison labor firm to provide food for the new dorms, canceling the Distinguished Women’s Award, and not telling the truth about faculty teaching workload during the quarter to semester conversion.

“I sat at a table right across from him,” Mitchell said. “He said a lot of things but none of them have materialized.”

While the results will not be posted yet, there will be a solid push to gain more voices and input from the faculty and staff.

Mitchell thinks some fear what could happen if they voice their concerns.

“Sometimes faculty feel as if they are going to face repercussions,” Mitchell said. “As a contracted lecturer, they could decide not to renew my contract because of me speaking out. That doesn’t matter to me. This is much bigger than that.”

Mitchell also said that leadership has gone from bad to worse.

Many faculty said that this vote of no confidence will be enough for Covino to resign. Without an immediate action on his part, the process for him to be removed goes through the CSU Board of Trustees, none of whom have been in contact with Cal State LA faculty, according to Baker.

“I nominate Dr. Melina Abdullah. Can I get a second?” Mitchell said.

Cal State LA has had seven male presidents in its history, so she hopes to see a woman president soon.

The university is clarifying the protocols and practices related to the role and scope of campus police responsibilities.

Baker fears that when the investigation results are eventually released, it will be over the summer, thus making it that much harder for faculty to have the opportunity to respond.

The UT reached out to Covino asking to comment on the numerous allegations made and he stated that they “are inaccurate, misleading, and/or unsubstantiated.”

Covino went on to say:  “Within our university community, there are varying views and perspectives, yet our faculty and staff are deeply committed to each other, our students, and our community. Extraordinary work happens at Cal State LA every day. I do not dismiss the feelings and concerns some have. I am listening and I welcome inclusive dialogue. Together, we can continue to address the ways in which our university can become an even more caring community.”

Additionally, the UT reached out to the chair of the academic senate to acquire the meeting minutes and votes, but the minutes will be released after their approval at the next meeting, and the votes are to remain anonymous.