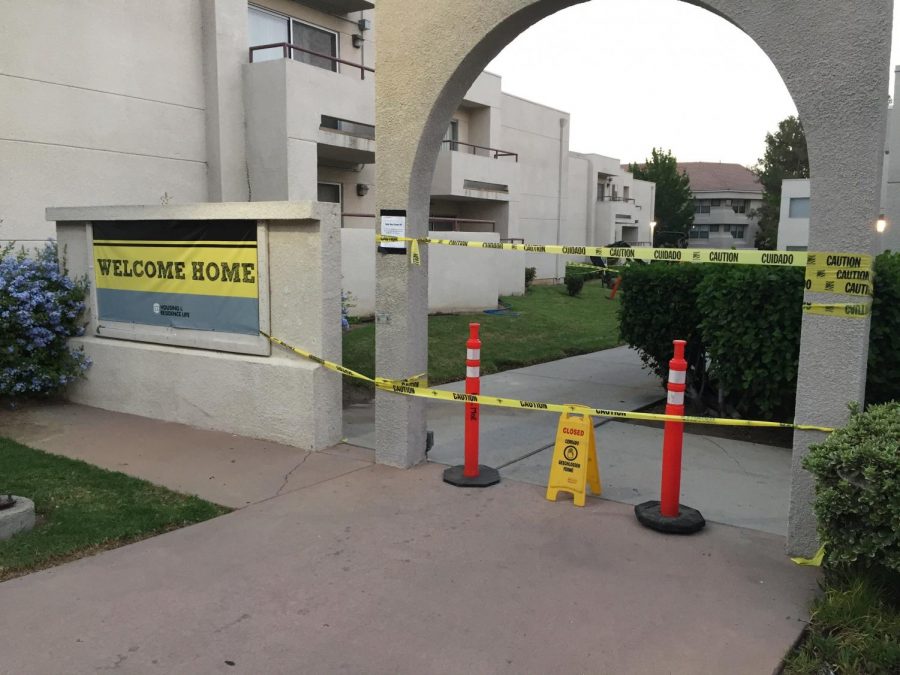 A pipe broke in the Phase I dormitory complex about one week ago — temporarily shutting down the water in the dorm and laundry rooms.

There was also slow water flow in the Phase II housing area for approximately an hour or two, but it was otherwise unaffected.

That’s according to students interviewed and emails sent that day, Sept. 18, 2018, to dorm residents from Housing and Residence Life.

A cap used in an old repair eroded, causing the issue in the water line, according to Rebecca Palmer, the director of Housing and Residence Life. The pipe was fixed the same day, she added.

Barricades were up for at least a week as workers repaired the pipe then the pathway outside, which had been ripped up to get to the pipes.

“You can’t really plan for something like that because it’s one of those random things underground that you don’t necessarily know about, but what we do put in place are really strong protocols and seamless processes so that we can make these repairs as quickly as possible,” Palmer said.

However, some students were still affected in spite of the precautions that were taken. “I had to brush my teeth and wash my face with water bottles. It took a lot of my time. I was a little late to class,” said Stephanie Martinez, a resident of Phase I housing.

Robyn Webb, a member of the Cal State Los Angeles track and field team, said it was inconvenient.

“I had to go wash clothes at a friend’s house. As an athlete, I have night classes. I want to come back to my dorm and take a shower, but the pressure is low or we didn’t have water,” she said.

There was an emergency relocation apartment set up in the event the water was out for a significant period of time and if the affected residents needed to take showers. Residents could have gone to an RA to check out a key to that apartment.

Martinez said she thinks she saw an email about the temporary space: “Personally, I wouldn’t want to shower somewhere else. It’s not [the] comfort of being at home and showering at my own” place.