What are Golden Eagles watching? 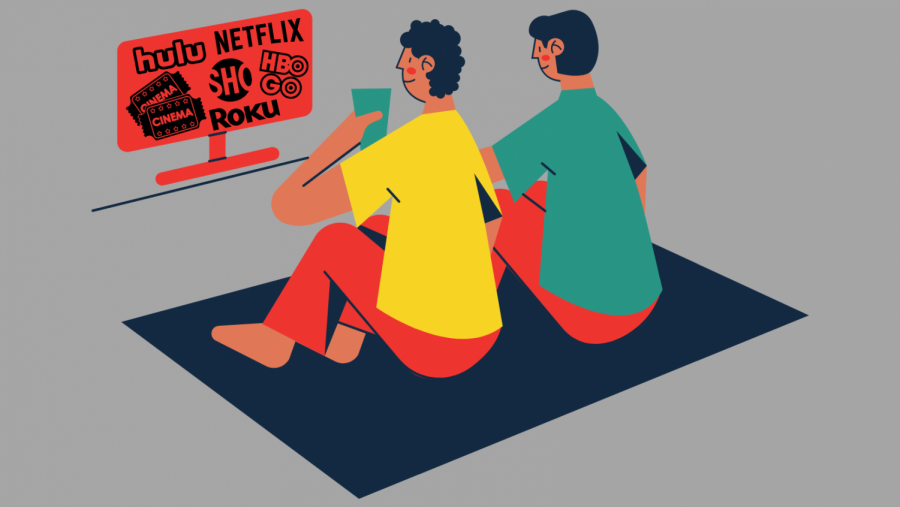 This image was created by Camille Jessie through Canva using Sketchify elements.

With more spare time on their hands, Cal State LA students share what they have been watching. Films and TV shows that have been nominated for this year’s Oscars or honored at the Golden Globes ceremony are among them.

In a long thread of responses on a Facebook post by the UT, students brought up films and shows like “Nomadland,” “The Nightstalker,” and “The Queen’s Gambit.”

Luquin wrote that she particularly appreciated the arc of the character Sam in “Palmer.”

“The kid, Sam, is a bit of an outcast in this … redneck … community: his favorite TV show is about fairy princesses, he likes to dress in clothes that are considered feminine by most, and he loves throwing tea parties,” wrote Luquin. “Palmer himself is forced to take a hard look at his own prejudices and figure out what makes him think Sam needs to change at all.”

Luquin added that the takeaway from this film resonated with her: “I really appreciated the message of change, equality, inclusion and family.”

Geology major Natalie Steenken had a few favorite films from the recent crop including Oscar-nominated “Nomadland,” the Golden Globe-winning Netflix film, “I Care a Lot,” and the comedy, “Barb and Star Go to Vista Del Mar.”

Steenken added that the grounded reality portrayed in “Nomadland” appealed to her.

“‘Nomadland’ is a film about a woman living a struggling life that a lot of Americans are going through,” wrote Steenken. “Living paycheck to paycheck, living in her van and trying to survive and making friends along the way. It’s a wonderful film and a wake up call of the reality of American capitalism.”

Steenken said she appreciated “I Care a Lot” for its “twists and unexpected nature.” She also added that “Barb and Star go to Vista Del Mar” was a “hilarious” camp film which was “needed during this pandemic.”

The Golden Globe and Emmy-Award winning “Schitt’s Creek” was political science major Ivan Rodriguez Garcia’s show of choice. Garcia said that a noteworthy aspect of the series was how it portrayed its homosexual characters.

“I think the arc between Patrick and David really normalized the idea of a typical same-sex relationship without the trauma and pain behind it like it is portrayed in most media,” wrote Garcia.

“Zoey’s Extraordinary Playlist” was a favorite for psychology grad Ashley Calderon. Her favorite character on the show is Mo, played by Alex Newell, because of his straightforward and funny demeanor, how he interacts with Zoey, and how he deals with his own internal conflicts.

“[He’s] conflicted with his religion and who he really is on his sexuality. He was scared to dress as a girl when he went to church because he didn’t want to be judged by his church community and so he continued dressing as a boy when he went,” wrote Calderon. “Even though the church he went to was very open to other people’s sexual preferences, he was scared to take the chance because of past trauma.”

Calderon also said that the episode ends beautifully because it concludes with Mo singing, now fully secure in his identity thanks to help from Zoey.

Several students spoke highly of the Netflix series, “The Night Stalker,” which recounts how detectives pursued Richard Ramirez in the 1980s. Many students said they appreciated the dark subject matter and enjoyed having an opportunity to learn about something that caused so much fear and uncertainty for people, like their parents, in that area.

Among those students, psychology grad Kimberly Cristina Figueroa also shared the same perspective. “‘The Night Stalker’ was something I was able to watch with my parents since they remember the terror L.A. dealt with during the ‘80s, so watching it with them was enjoyable,” wrote Figueroa.

Figueroa also enjoyed watching the series, “Outlander” because of her affinity for history and the premise of the show.

“Outlander has time travel and a love triangle through space and time so I found that very interesting. Also, I love history,” wrote Figueroa.

Child development major Elizabeth Schery said she enjoyed the Marvel miniseries, “WandaVision,” because of its attention to detail in recreating the look and feel of iconic sitcoms.

“I am not familiar with many sitcoms but WandaVision does a good job at recreating classics from the costumes, music, [and] style, to the directing of the camera. It is at times cheesy which is funny and it also shows the life of two characters who didn’t get a lot of screen time in the Marvel movies,” wrote Schery.

Self-described film and TV show fanatic Angela Chao ranks Netflix’s “The Queen’s Gambit” as the best show she watched this past year.

Chao wrote that the impact the show had on the popularity of chess impressed her: “After the show [was] released, chess interest massively increased. The sale of chess sets increased 87% in the U.S. and chess books went up to 603%. Sixty-two million households watched “The Queen’s Gambit” in its first month and it broke Netflix records!”

The development and arc of the show’s protagonist Beth Harmon, played by Anya Taylor-Joy, also stood out to Chao.

“Honestly, every episode had an impact on the storyline, but my favorite character arc is definitely the full development of Beth: going from a child prodigy dependent on drugs and teen rejecting companionship/support to a fully grown woman who found herself capable of being by herself in her own company without madness and her reaching out and accepting support from her friends,” wrote Chao.

In case students want to partake in a watch party, Cal State LA is having one on October 7 at 12:15 p.m. to watch “Suppressed,” an award-winning documentary about voter suppression in Georgia during the 2018 election. For meeting details and Zoom links, contact the director of the American Communities Program, Maria Karafilis at [email protected]