What is Dia De Los Muertos? 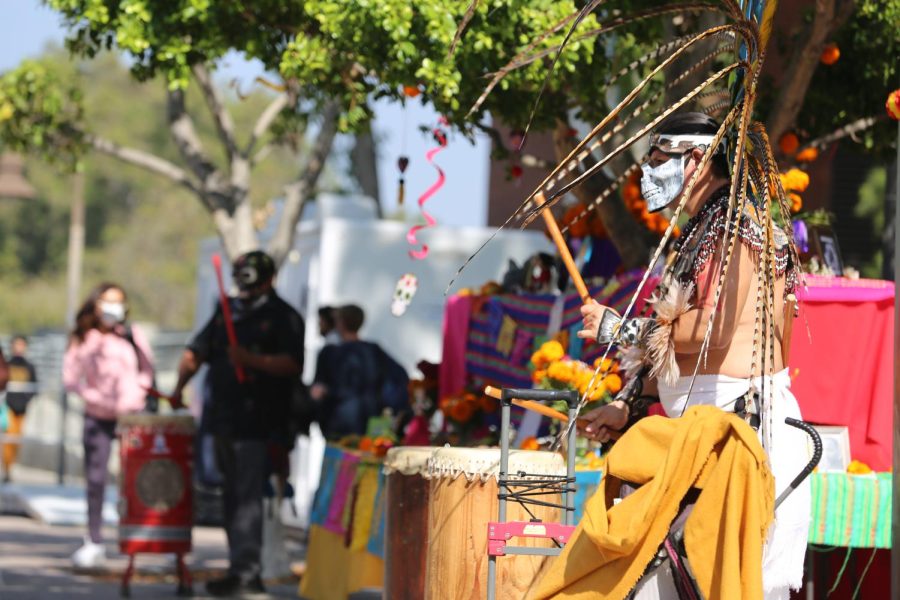 Día de Los Muertos is a time for people to remember their loved ones and mourn their transition into the afterlife. But how did it begin?

In Mexico and other Latin American countries, it is called “Día De Muertos” (Day of the Dead).

The tradition originally began as a celebration for the goddess of death, Mictecacihuatl. At the Día de los Muertos: Tradition and Transition workshop that was led by Felicia Montes, of Mujeres de Maiz, she shared the Aztec myth that the goddess was sacrificed as a baby and grew to adulthood in the underworld, eventually marrying the underworld’s ruler.

The Aztecs wanted to make peace with the underworld gods, so they buried those that passed away with food and precious objects. The celebration went on throughout August and lasted a whole month. It was commemorated in the ninth month of the Mexica solar calendar.

Nancy Sanchez, an anthropology major, celebrates Dia De Los Muertos because she wants to learn more about her own culture and where her family is from. It helps her connect with her family’s history.

“To me, it gives me a sense of understanding other family members since I really didn’t get a chance to meet many of them since they live in Mexico,” said Sanchez. “It gives me a chance to acknowledge who they were, and since I have my altar outside yearly, it’s nice to see them and how they are.”

Sanchez learned about the tradition from other people who celebrate it and also from her grandma on her visits to Mexico. In college, she became more involved with the Latinx community. She was the secretary for the Santa Monica Community College Adelante program and decided to create a community event for Dia De Los Muertos.

“There, I was able to get Aztec dancers and an altar, educate the community about different cultures that celebrate Dia de Los Muertos, hand out tamales, and Pan de Muerto,” she said. “Now I have my own mini altar at home with my family members. Of course, there’s lots I still don’t know, but I always enjoy learning more.”

For Breann Perez, a psychology major, it means bringing her family together. Dia De Los Muertos is a guarantee that she will see her family, although they cannot see each other as much as they would like.

“I celebrate Día De Los Muertos because in my culture we celebrate the good memories of the dead,” said Perez. “Our ancestors and past relatives, we come together and just reminisce about the good times we had with them. We also do things they love to do. My uncle loved garbanzo beans so we offered it to him with a picture of him so he knows it’s meant for him. At the same time, we enjoy the garbanzo beans, almost like we’re eating it with him.”

The workshop was held on Oct. 27th and participants were taught about the contemporary Indigenous/ Chicana/o/x/, Mexican and Latinxc celebrations of Dia de los Muertos.

In the Catholic tradition, the first and second days of November are “Todos Santos,” meaning “All Saints.” This festival of welcome is for the souls of the dead to come back and visit the living. The living prepare “ofrendas,” which are offerings for the souls to enjoy as a way to welcome them back. This is both a rural and urban Mexican tradition that can be celebrated privately or publicly.

An ofrenda is usually something that is homemade with no store-bought items. It serves as an altar to honor those that have passed on, while welcoming the souls to come back and enjoy what they loved once again.

The ofrenda can be presented by placing a decorated cloth over a table, along with things like incense, flowers, candles, photographs of the loved ones, their favorite items, food, and figures of saints. Foods like posole, chips, fruits, tequila, and Pan de Muerto can also be placed on the altars. Pan de Muerto is prepared all around Mexico in the end of October and the first days of November. It is used as a fraternal offering to the souls.

Marigolds are the flowers most commonly used. The Aztecs considered marigolds a sacred flower and used them for decorative and medicinal purposes.

In Mexican culture, there are two types of death. One is physical and the other is being forgotten. An altar is a way the living can remember those who have passed. The altar will have pictures of them, so they can be celebrated instead of being forgotten. If no picture is shown or the person’s name is no longer said, they can easily become forgotten. This is the final stage of death.

Dia de Los Muertos is celebrated on Nov. 1-2. Cal State LA hosted an in-person procession and celebration at the U-SU plaza where a group of danzantes (folk dancers) lead the way to three altars around campus honoring those who have passed.