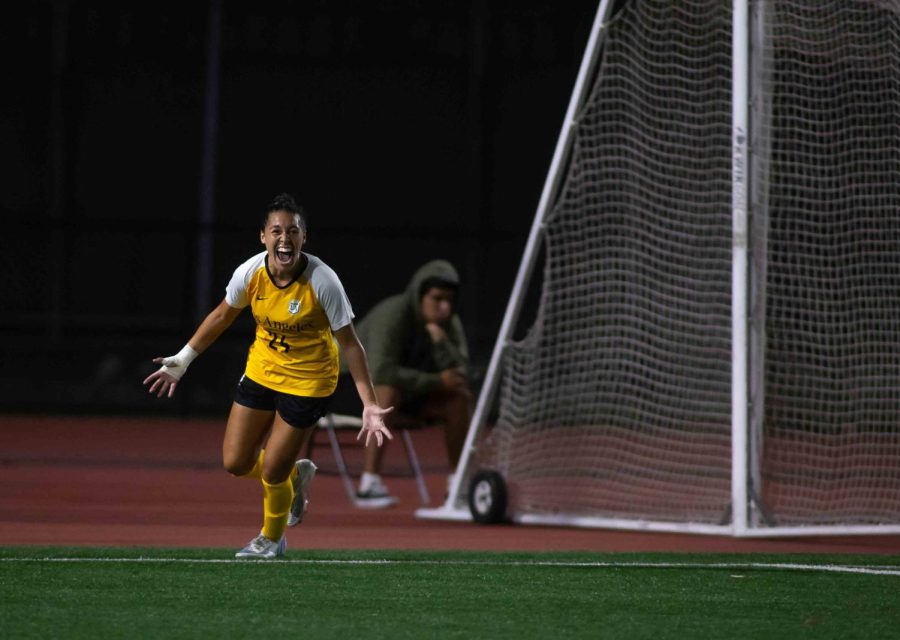 Photo by Xavier Zamora. Midfielder Morgan Patea scores off a pass by teammate Destiny Moedano during the first half of the Golden Eagles’ 1-0 win over Biola at University Stadium on Wednesday, September 14, 2022. Cal State LA, now 3-1-1, faces Point Loma at home this Saturday at 4:30 pm.

Biola’s Eagles couldn’t do much in this game, only taking two shots on goal and none on target.  Meanwhile, the Golden Eagles dominated the game from start to finish with 13 shots and six on target. The second half began with a lot of intensity from the Golden Eagles, putting pressure on Biola, who was not able to finish their opportunities.

Coach Garcia was telling his team to attack the wings and apply pressure, and was glad with the final result.

“I’m glad we won this tough game,” Garcia said. “We started off the game with a lot of physicality against their defenders which was really helpful when Morgan got the ball and shot it right over the keeper of Biola.”

Morgan Patea, who was the only scorer of the game, was excited when her teammate, sophomore Destiny Moedano, gave her the pass to finish the goal.

“It felt good to help the team get the win. I honestly think we could have scored two more. We had a lot of chances to completely control the game, but we missed our chances which we will learn from,” Patea said. “When I saw the ball coming towards me I just thought ‘I should chip the keeper’ and when I saw the ball barely go over her finger, I ran to celebrate with all the girls.”

The Golden Eagles are now 3-1-1 on the season and will face Point Loma in their next matchup this Saturday at 4:30 p.m. This will be their last game of the season before entering California Collegiate Athletic Association play.